So, it's been a week since I got back from Banff and I've had time to wind down and reflect on the 5 weeks I was there.

First of all, the program was intense. We practically didn't get any time to ourselves until a week before the shows. Perhaps principals and people who were only in one chorus were luckier than the rest of us in that respect, but I'm pretty sure everyone was kept very busy. This element of the organization was deliberate, and has its upsides and downsides. For one thing, it's hard work. Over 50 hours of classes/rehearsals a week meant that we essentially crammed more than a term's worth of college into 4 weeks. On the other hand, what doesn't kill you makes you stronger, and this way of working definitely builds up stamina and self-awareness, which is what the program aims to do. Another side-effect of the long hours was that there wasn't much time for individual practice or working notes from the previous sessions. Sometimes it wasn't even a question of time itself, but if you got an hour off at some point, you were too tired to focus on more work, so you had to use that time to rest.

The staff were phenomenal. It's thanks to their dedication and inspiring attitude that the heavily loaded schedule seemed in some ways to fly by. We didn't get to work with some of them as extensively as we would have liked to (more time in smaller groups with J-P Fournier would have been amazing), but on the whole I couldn't fault a single class I attended.

The program focuses on the rehearsal process. While there are general classes in the mornings, you spend most of your time in rehearsals, with individual lessons and coatings allocated in your spare time. Being in both operas, I had very little of said spare time, and most of that was assigned to coachings on Guglielmo. This meant I only got a couple of singing lessons over the course of the program. Others were much luckier than me, and I understand that the rehearsals had to come first, but I wish there was a way of balancing it all out better.

I'll just quickly touch base on the understudy aspect of my experience. Again, due to time constraints it didn't quite live up to my expectations. Covering is always a tricky business, and depending on where you get work as a cover, you may or may not receive extensive rehearsal time, or a covers run of the show. In a training program, however, I had hoped to get some time on stage and perhaps some form of performance to sum it all up. Unfortunately, as most of the covers were involved in both operas, or had to juggle chorus and minor roles in Lillian Alling, there was only time to focus on musical coaching. I did end up learning the role quite well, with a better understanding of it than I could have gotten preparing it on my own, but at the end of the day, as a cover, I felt pretty useless. If I had had to go onstage to perform, I would probably have been a major hinderance to the rest of the cast, never having done the blocking. I should note, that the staff were made aware of these concerns and I'm sure in future years this will be addressed.

All in all Banff was a fantastic experience. The program delivered on its aims, though perhaps not quite in the way I was expecting. The classes all broadened our horizons and expanded our pallet of expressive tools, the productions were rewarding to put on, and as I mentioned earlier, the staff were exceptional. However, a program isn't just schedules, classes and shows. What made Banff OAT 2011 the wonderful experience it was, were the people. Through some combination of good casting and luck, we ended up having a fantastic group of dedicated participants, who worked well together on stage and off. The people I met there weren't just good colleagues and fun guys to hang out with (which they definitely were), they all inspired each other, supported when someone needed it, and together created the atmosphere that made my stay in Banff something I'll always remember. 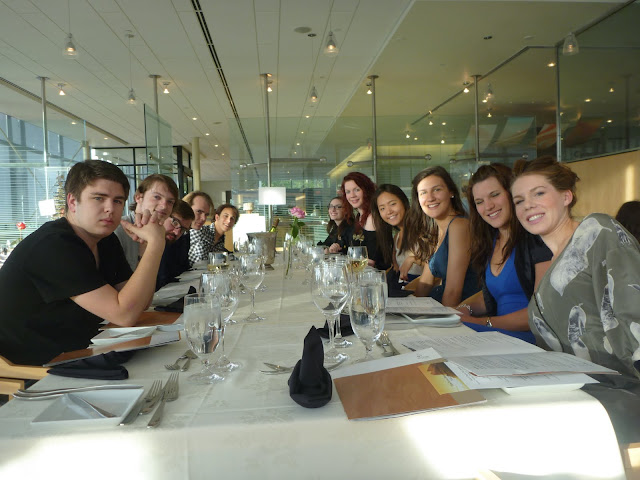 Here endeth the cheese. I hope reading this you don't get the wrong impression, the program is intense, but I'd definitely recommend it both as an experience and as an education in itself.
Posted by Jan at 11:04