Coming down with a bad case of hemiola *

It's been a couple of days since I arrived in Glasgow to undertake my first engagement with a professional opera company in the UK. First off, a few words about how it's all organized, as for a long-time student it's all a bit magical to me. 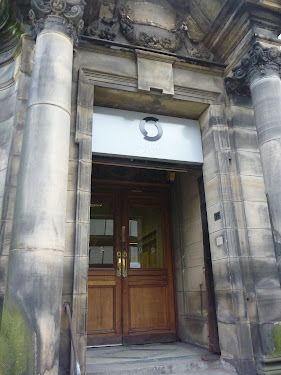 I got the schedule for this week last Friday, with all the calls I'm expected to attend, but no mention of what's happening in each call other than whether we're doing music or production. The details are left to be worked out as we go along, but at least we know when we've got free time in advance (which is useful as some covers are already scheduling Alexander Technique and singing lessons). We start off on Monday afternoon with a tour of Scottish Opera's beautiful building and then a coaching session on the solo numbers and duets. The evening call sees the entire cover cast together for the first time to go through the big ensembles with Derek Clark, Head of Music and the conductor for the Orpheus shows with orchestra. On Tuesday he works through the entire piece with us, thus concluding our music calls. From now on it'll either be production or sitting in on the principals' rehearsals.

Our contract limits the number of calls we can have a week, and the schedule so far does not include too much observing, probably because from what I've heard from the principals, the show is pretty dance-heavy, so they want to get us stuck in and practicing the choreography as soon as possible. We were told that we're welcome to sit in on rehearsals outside our calls, but apparently there's no emotional blackmail involved. It's somewhat tough, as most days we are set to finish at 10pm, which will make it a tiring process and have us wanting to sleep in as much as possible. Still, after Banff it shouldn't be too bad.

The show itself, from what we've gleamed so far, is quite risqué. The text we're working with is a new translation by Rory Bremner. Well, I say translation, but in fact it's more a brand new libretto woven around the basic plot of Offenbach's operetta. Being newly commissioned, it is still undergoing some refinement, as we found out the very first day. A fair amount of the text is different from what we were given originally, which will make the next few days quite busy, what with all the unlearning and cramming we now have to do (thankfully there are quite a few cuts, though these too have to be learnt).

Once again I found myself in a heightened state of tension, having to sing in front of a new group of people. What makes it worse is that it's a professional environment now (and frankly I don't feel particularly professional, I'm still the same person I was in college 2 months ago...), with some of the other covers having sung for Glyndebourne, Grange Park, Buxton, etc. Still, once we get into it we find that we gel quite well as a group (this is confirmed later in the pub as well) and I even get a few compliments for my falsetto (I'll spare you the details of what happens in the scene that prompts the falsetto, let's just say it's quite graphic). I'm not really sure what I was expecting, but I'm pleasantly surprised by how friendly the atmosphere and people are here. I'm beginning to think that perhaps this business isn't as bad as some people say it is, I seem to always find myself surrounded by nice people...

All the covers decided to watch today's afternoon rehearsal, which just so happened to be a full run of the show. Having heard so much about it, we were ready for most of the shocking moments. Most, not all... It's a provocative production, but funny. Some of the dancing may require stagger-singing though. We'll see how we get on, we start production in the evening. We don't get far enough for me to even appear on stage, but at least our director is realistic about what can be done in one session and lets those who aren't needed go early.

* a paraphrase of Derek Clark's comment about how the word 'hemiola' sounds a bit like a disease...