I recently sang my first ever Messiah. It was in the Basilica of Bom Jesus in Old Goa, India. While it was my first performance of the piece, I had been working on it for a few months prior to the trip, so I was more than familiar with it... unlike the audience, who turned up in their hundreds (we estimate the audience was 800 strong) to hear the first ever full-length performance of the Messiah in Goa. The following concert on the trip was in Mumbai, where Handel's best loved oratorio had not been performed since 1962, and the audience turnout was even stronger (around 1000).

Over here in the UK the Messiah seems to be done everywhere and all the time (especially around Christmas), to audiences that will most likely join in the singing or at least hum along. One of my fellow soloists from India suggested I start a tally in my score to see how many Messiah notches I can amass. To say it's a familiar piece here would be an understatement.

In India however we had (for the most part) a virgin audience. Not only that, but in Goa we were performing to people who didn't have much to do with western classical music before. Watching their reactions to the performance was priceless. Sure, there were people with puzzled looks on their faces, obviously not really sure what to make of the whole thing - strange music being sung in a bizarre way (while we were setting up for rehearsal some of the locals asked when the microphones were going to arrive... well we showed them!). But there were also people who reacted to the music in ways that we would never see here in Europe (burdened as we are with our sense of propriety and respect for the hallowed art of classical music), and yet were so organic over there. A lady in the front row danced to the Hallelujah chorus. A gentleman came with his Bible and prayed with the music. A few people were listening so intently you would have sworn they'd fallen asleep if you didn't later see the tears in their eyes during He was despised. You could see the audience be literally moved by the piece and the performance.

It was a fantastic thing, and an experience I will recount to people whenever they mention that classical music (or opera in particular) is elitist and unaccessible. It isn't... and if it is, it's only because we have made it so.

Yes, the fact is that classical music relies heavily on the generosity of a certain class of private individuals (with public funding being cut every year it's no surprise!) and therefore these wealthy people will naturally be a part of the audience, and quite a visible one... But why should that stop anyone else from going to experience the same performances? Cheap tickets can always be found! Yes, there is also a very visible group of people educated in music, either at university or on their own fuelled by a fierce passion for the art. Many critics will hail from this group and then seem to write only for the benefit of their own kind, leading the uninitiated to believe that if they were to want to join the audience they have to make up for their lacks in education or risk 'not getting it'... But the people in Goa definitely got the Messiah without reading up on Handel.

I'm not saying that research and preparation is a bad thing. It can help you appreciate what you are seeing and hearing more, but it's rarely essential. Music or opera can also be taken at face value and very often it will work! It will move the audience. Of course, there are bad concerts and shows, just like there are bad books, films and tv programmes.

Anyway: economy, history, politics, education, etc have made classical music what it is today - a very polite and civilised way of spending an evening, an excuse to dress up a bit, a bit of a middle-to-upper-class thing. But the essence of it isn't that at all! Stripped of its context the art stands on its own and has the capacity to move, fascinate, challenge, reward and please. I wish everyone the curiosity that drove our Goan audience to the church that night, and may it drive us to try things we wouldn't normally call 'our cup of tea' and let us experience them unashamedly. 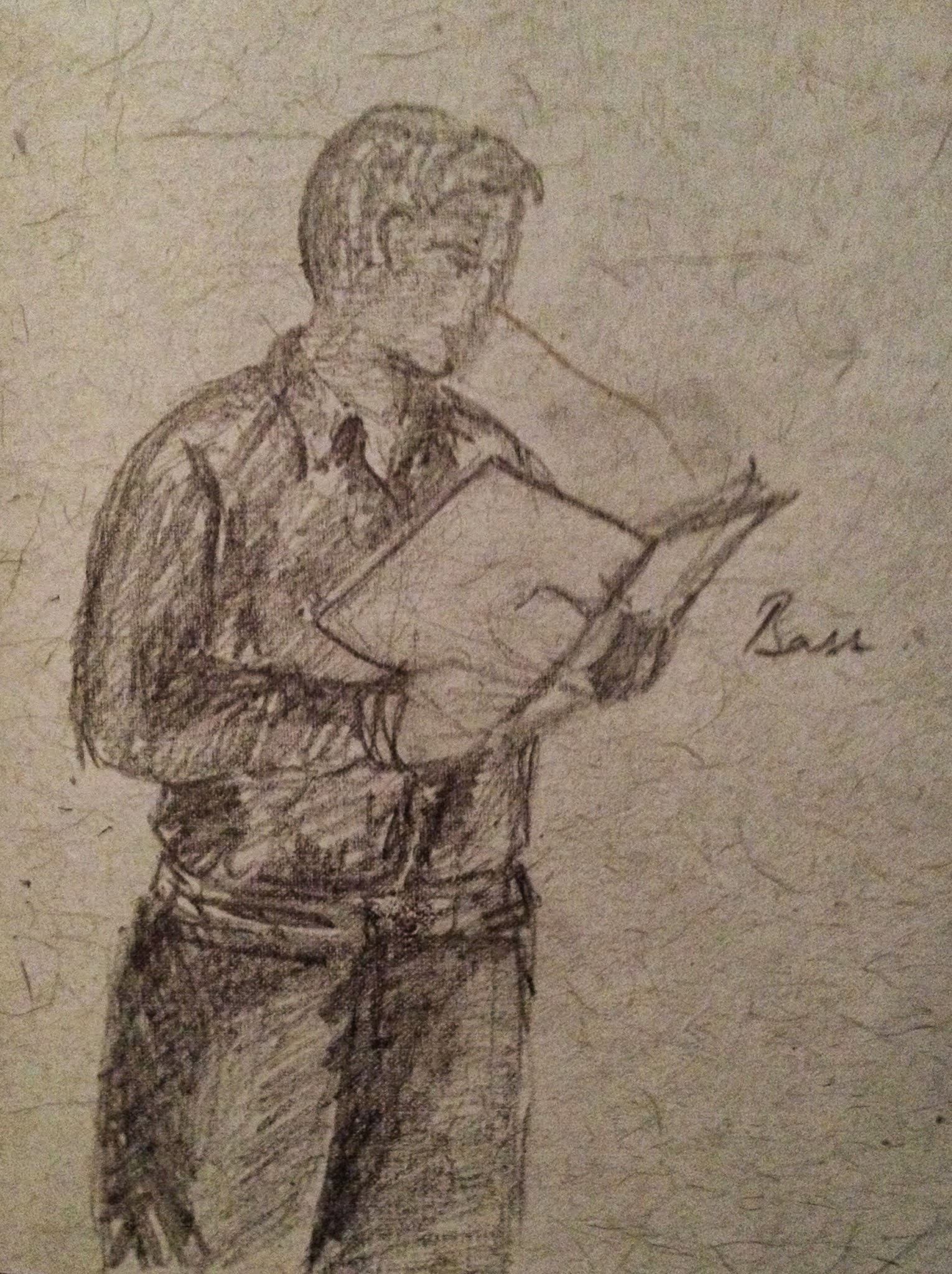 One of the audience in Goa sketched all the way through the concert,
capturing the soloists and conductor.