Imagine you're singing with me.

I haven't often had the opportunity to be in an opera chorus, and I have to admit I'm finding this season at Garsington Opera to be a bit of a re-education. I remember my last foray into the crowd-scene world: the Banff Opera Festival, where our director Kelly Robinson (currently directing Guildhall's Owen Wingrave) told us why he thinks the chorus plays a vital part in any opera. He said we create the world that the main characters inhabit, and it's down to the chorus whether that world is alive and vibrant and gives the story a place to come to life. The production we did then (John Estacio's Lillian Alling) was all about the title character's journey across the North American continent, and the chorus had to create a completely different world for every place she visited, and this involved a lot more than simple costume changes.

We have a similar challenge in Garsington this year, with the men of the Maometto Secondo chorus having to portray a huge contrast between a desperate Venetian militia defending the doomed city of Negroponte and the invading Turkish horde. Throughout the rehearsal process we were exploring how to make that contrast as stark as possible, without falling into the trap of making the Venetians so pathetic as to be dramatically and musically dull (the impact of a introvert physicality on your singing is unexpectedly huge!). It was very rewarding to hear people commenting on the success of that after last night's dress rehearsal.

We were thrown an unexpected curve-ball by the venue itself though. Garsington Opera has it's roots in the open-air country-house opera tradition, and although we perform in a purpose-built acoustically stunning building, the walls are transparent and most of the show is performed in the daylight, with the sun only setting in the second act. This means there is little that can be done in terms of lighting until well into the later half of the performance, and as our director Edward Dick pointed out to us - the chorus have an additional job: directing the audience's attention in the way that the lighting design would normally guide people's focus.

I'll admit to a passing sense of frustration initially, when trying to navigate between creating the aforementioned personalities of the Venetians and Turks, and being told that what we were doing was too much and distracting. It was only when we entered the venue and I fully realised what we were dealing with that I really understood the importance of not drawing the audience's attention away from the story of the main protagonists. In the daylight, the public can see every tiny detail on stage and every little move registers! It really i quite uncanny if you're used to how it works in a conventional theatre, where a subtle spotlight solves the problem of where we want the audience to look. 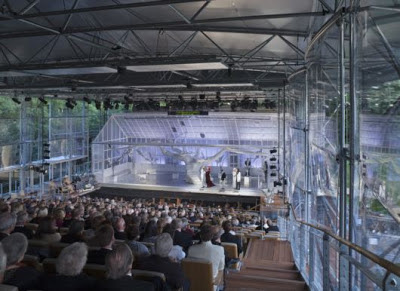 Does this mean the chorus have to just stand there and look at the principals? Well, yes and no (with a huge lean towards 'no'). There's a world of difference between just standing there and being there with the purpose of giving focus. The amount of still attention required is (for someone used to either being an active principal, or part of a lively - if dimly lit - crowd) astonishing. You may be still, but you have to listen to every word, breathe every breath, feel every intention that the main character is going through. Otherwise you will find your attention drifting, and run the risk of pulling the audience away with you. It's a lot harder to create an energised still tableau than one might think, and the key seems to be in mentally joining in the principals' journey, both musically and dramatically.

Paul Nilon (singing Erisso) captured it best when he said: Imagine you're singing with me. It really does keep you energised, breathing with the story, and (when watching someone with as exceptional a technical command of the voice as he does) teaches you a lot about performing at the same time. 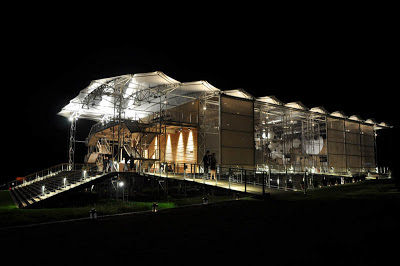