Is there madness in my method?

I am a singer. My training in the field of acting is limited to basic stagecraft (mostly of the 19th century variety), a rudimentary explanation of Stanislavski from a couple of directors, and then just hands-on experience of doing what I'm told on stage.

I have noticed however that recently the roles I'm preparing seep through into my 'normal' identity. I would normally have classified this as nothing more than in-cast banter for the most part, especially since over the last year I've played a certain type of character repeatedly (I hope it hasn't reached type-casting yet! I don't want to play misogynistic arrogant twats for the rest of my life), a type that lends itself to humorous caricature in social situations.

However, the role I'm engrossed in now is a neurotic, slightly deranged painter, who is plagued by night terrors. I have 2 mad scenes in a 75-minute piece. I rehearsed them both yesterday, and since them I find I'm not quite myself and am having trouble sleeping. Before you say anything: I'm not a method actor and I'm not going crazy. For all I know, nobody has noticed any change in me, but I have! It's not big, it's not profound, it's nothing too serious, but it's there, and to be honest... I'm surprised. And it has me wondering if actors experience this as badly as musicians, and do they have ways of keeping it from happening, or do they feed off of it?

I would think of myself as level-headed, maybe even cynical. I've been praised for my intelligence as a singer, not my over-the-top emotionality. Yes, I'm a performer, maybe even an artist, so I have a degree of sensitivity (which has, I have also noticed, grown over the years, I never used to get moved to tears, these days it happens embarrassingly often, up to twice a year), but I didn't think that simply rehearsing something could get under my skin.

I suppose it's a two-way street: I bring to my performance my limited (but ever-growing) life experience, but then have to endure and carry in my self whatever the character goes through, which (when set to music well) is heightened to pretty extreme levels, so maybe no wonder that something stays with me? A five minute mad scene (albeit repeated numerous times in a staging session) has me sweating buckets and left with shivers (before my teachers freak out, I'm vocally fine! That's one detachment I'm managing at present), then catching myself staring blankly ahead when normally I would probably be horsing around...

You want to know what the most embarrassing thing is? This opera was written by two of my friends! See what you've done to me guys ;) ? And what I now want to know is where you in turn got the impulse to create something that has this effect on your performer.

PS This doesn't necessarily mean the piece is that good :P (that's up to the audience to decide) I may just be an over-sensitive wreck who should stick to comedy... 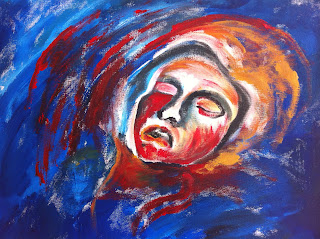 Now for a shameless plug: The show in question is in London next week, on the 16th and 17th at the Riverside Studios as part of the Tête à Tête Festival. Book here!
Posted by Jan at 22:25