The past couple of weeks have been tough because of a number of goodbyes that had to be said and the fact that I found myself stuck thinking of my life as a series of short disconnected episodes. I'm not sure it's a feeling I can describe, but I think that it's something that other artists in 'the industry' can relate to (not that I'm in 'the industry' yet, but I've had enough previews to get an idea of what may be in store).

It started with our trip to the Orkneys with Carmen. As I wrote about the production in an earlier post, we were already a closely-knit team before going up, most of us having worked together on numerous projects before. A week in close proximity does strange things though. I had experienced a bit of this doing Orpheus in the Underworld in Glasgow: strange place, living out of a suitcase, not knowing anyone except the people you're working with. You end up spending a lot of time together, both in rehearsals and socially. You grow close, closer than you were before, no matter how much you'd worked or hung out before. You feel safe with these people, you can be yourself around them, you share experiences and stories that won't be funny or make sense to anyone who wasn't there, and it's as if the world narrows down to just that place, those people. For a short while. You go home and even though they are still in the same city, even though one of them is your flatmate, even though you'll see them again, you feel as though you've lost something. You miss it, you feel a bit empty inside.

Add to that the fact that before 2 weeks have gone by you have your last college performance with a group who have been there with me, and for me, for 2 years (some of them even 3). No more familiar team for college productions, no more concerts where we can whack out familiar repertoire that we've done together so many times that it's like second nature (I know how my friends introduce their pieces almost word for word now), no more people who know me so well that when they tell me not to worry about something - I believe them (and they know they can always count on my support as well).

I know the future will bring new people and new projects with new stories, new dynamics, and new colleagues. I also know (or at least believe) that I'll be seeing the leavers again (and hopefully working with them as well). But one thing is for sure: it won't be the same. It won't be worse, or better, it'll be different, and that's why I'll always miss these years in college, that week in Kirkwall, that Summer in Banff, my first Magic Flute, the Nozze di Figaro trip to Kołobrzeg...

It makes me sad to think that my life will turn into a series of adventures (to quote Alma) where I will meet and get to know people whom I will then inevitably end up missing, but it's a heart-warming sadness, because it means that all that we go through together stays with me and feeds the flame so to speak. I will work with new people, on the same operas perhaps, but to everyone I've had the opportunity to share everything up until now with:

To me you are irreplaceable. 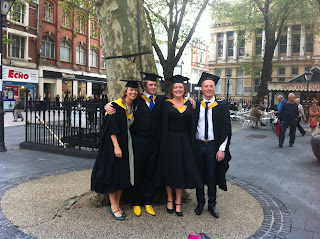 From left to right: one of the lads, the rock star, my leading lady for 3 years, and a random pianist
I hope they will forgive me using this photo and that DD has a sense of humour ;)