Dare to do more! - Natalie Dessay

We'd known since last year that she was coming, but it seemed too good to be true. Even as plans changed at the last minute I found myself worrying that it might not actually happen... but it did! Today we were visited by Natalie Dessay, who spent half a day working with our sopranos (and Joe). Originally we were all to have had the chance to sing to her, however circumstances forced her to shorten her visit, which was a shame, but still, we got a rare opportunity handed to us!

She insisted that the class be closed and straight away said she was probably more nervous than we were. All nerves were soon forgotten once she started working with our girls though. I'm not going to write a long spiel about what an incredible person she is, but I will confess to being surprised at how friendly, down-to-earth, genuine, unassuming and warm she was. Watching her work just put a smile on my face, and the fact that every now and again we were treated to her singing was an added bonus! In fact, everyone left the room with huge grins on their faces :) (or should I say: :D ) 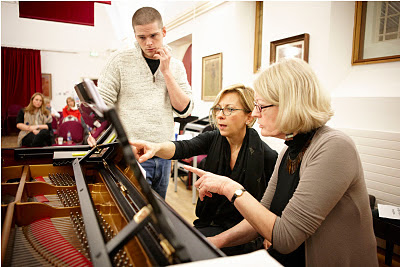 I could go on about how amazing it all was, but I don't want to come over as star-struck (even though I admit I actually am!). I'd rather post some quotes from her that I jotted down during the class. Perhaps some of you will find them helpful / insightful or funny, I will personally probably find myself revisiting this post to refresh my memory of a great day.

The one thing that she said to almost everybody, referring to many different aspects of performance, was this: Dare to do more! (Dare to be pianississimo; Dare to move; Dare to do it faster; Dare to take more time; Dare to use more ornamentation; etc) I think that sums up what I felt her approach is all about: never holding back anything, infusing every word, every note with intention and energy, heightening every contrast to the extreme, etc. Cliches? Perhaps, but hey!, if it works, it works.
Quotes:
Accompany yourself with your body! - on posture/stillness, not getting stuck and allowing your body freedom to move
You can't think and plan to the end, because you're not supposed to know what you're going to say. - on recit
If you have an aria on 1 idea, you have to work harder to add contrast to keep the audience surprised.
It's easier to sing if you're in control of the orchestra, than when being controlled by the orchestra. - on daring to 'drive' the piece rather than sit in the back seat
Using vibrato protects the voice. - on vocal hygiene, she also was an advocate of as round a sound as possible without losing clarity of text
If you want us to follow the text, you have to build it for us by using the punctuation.
Coloratura is not a question of voice, it's a question of articulation and precision.
In French music almost NEVER portamento. And even when it's written... think again!
Dare to go as far as possible with interpretation, even if you don't keep it when you go to perform. - on daring to deliberately sing flat and 'ugly', or just to not sing on ahs and ohs
Because you're able to do it so fast... maybe a bit faster? - on coloratura
Dare to add everything you want... but in style! - on ornamentation
Do you have a cadenza for this? (...) I don't like it, it's too simple.
Invent something that I wouldn't invent myself. - again on ornamentation, which allows you to show your personality and imagination
What is better for your voice, to go up, or to go down? Up? Well then go up! - on cadenzas
And finally our favourite quote, when working on Manon's aria Adieu, notre petite table:
I know it's written forte, but I think that's stupid. I called Massenet on the phone and told him it can't be like that.
The best thing about today was that everyone enjoyed it, including Natalie Dessay. In fact, there's another quote: Now that I see you are good, I will come back, which was a joke of course, but she mentioned returning a couple of times, so fingers crossed! 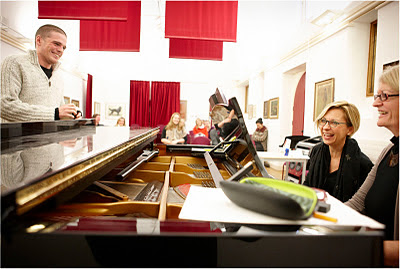 Photos by Kiran Ridley
Posted by Jan at 16:01